In 2007, both the U.S. Congress and the U.S. Senate passed resolutions proclaiming March 30th as National “Welcome Home Vietnam Veterans Day.” Below is the text of a March 30, 2015 e-mail from L. Patrick Little, National Commander of the Military Order of the Purple Heart, commemorating the day. 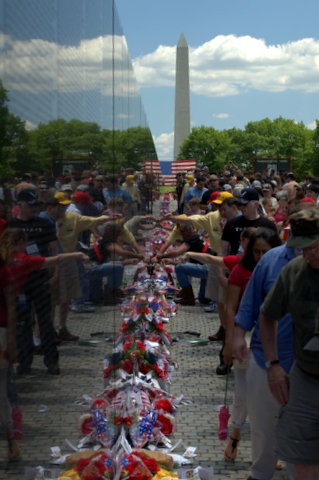 Today marks the 42nd anniversary of the official end to the War in Vietnam. With more than 26,000 members of the Military Order of the Purple Heart who are Vietnam Veterans, it is important that we pay special homage to their service and sacrifice on behalf of this great nation. When we returned from combat, there were no ticket take parades, no pretty girls to kiss in Times Square, and no clapping as we walked through the airports. In fact, many of us were made to feel ashamed for having served in the military. For this reason, in 2007, both the U.S. Congress and the U.S. Senate passed resolutions proclaiming March 30th as National “Welcome Home Vietnam Veterans Day.”

U.S. forces first began serving in an advisory role with the South Vietnamese military in 1961. The U.S. sent ground combat troops to fight with the South Vietnamese against the Communist North Vietnamese and Viet Cong guerillas in 1965. The war ended after the Treaty of Paris was signed on March 19, 1973, and all U.S. troops were withdrawn. In total, more than 58,000 members of the U.S. Armed Forces lost their lives in the war, and more than 300,000 were wounded. They deserve to be remembered and honored.

As you go about your business today, I hope you will proudly wear something that demonstrates that you are a Vietnam Veteran. Because the American people have finally managed to separate the War from the Warrior – I’ll bet a lot of people will stop to tell you, “Welcome Home” and “Thanks for your service.”